Why Subrogation Matters to You

Subrogation describes an insurance company using its legal right to pursue third parties responsible for the loss to an insured. This action is necessary to help the covering carrier cover claims paid out to their insured. Insurance carriers that go this route for compensation are essentially becoming the policyholder and will pursue repayment of related expenses to the insured's claim. 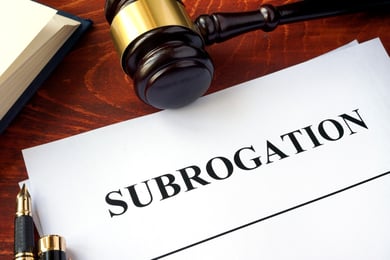 What Does the Subrogation Process Involve?

When an insurance company takes the place of its policyholder in a claim, this is the literal act of subrogation. The reason this approach for loss or injury claim is useful is that it streamlines the settlement process. By allowing those who suffered damages to receive relief immediately, the carrier can handle the rest of the process more efficiently.

One of the main aspects of this process is the direct payment of losses to the insured after a loss. This is the point of having insurance, and by receiving prompt compensation, the injured party no longer has to pursue a potential third-party since their own coverage handled their claim.

With the policyholder taken care of, the covering insurance company can then file a subrogation claim against the other at-fault parties. This action could also include third-parties responsible for the damages if their coverage is not sufficient for the loss.

Examples Where Subrogation is Necessary

Subrogation of a claim is not exclusive to car insurance accidents. Employers and business owners routinely face claim situations that require subrogation. Consider some of the examples below that highlight how subrogation works in different loss or damage scenarios:

Workman's compensation insurance has many possible instances for insuring companies to step in and pursue a subrogation process that recovers monies paid to its policyholder. In cases where a third party is negligent and causes a worker to suffer injury, employee insurance carriers could instead pay the workman's claim and then pursue the other parties involved to recoup the payout.

Many times insurance coverage providers will step in after a car accident and compensate their covered policyholder to allow them to seek immediate care for their injuries and losses. For example, if someone is commuting to work and gets t-boned while legally driving through a green light, their coverage could immediately begin processing damage claims. Immediately after, the insurance company will pursue subrogation to recover the damages paid to the injured victim.

Finally, subrogation is a useful tool when dealing with property damage. If a business were to catch fire and burn down because of defective wiring in one of the ceiling light fixtures, its insurance carrier can pay out the loss and recover this compensation through a subrogated action against the manufacturer of that light.

Damages and losses where a party is not at total fault can also rely on subrogation to offset some of the compensation. Parties who are partially responsible for an accident that results in damages can pay their deductible and get repairs taken care of right away. This step then allows the insurance company to subrogate part of or all the costs paid to the insured.

What is a Subrogation Waiver?

Insureds who waive the right to subrogation creates a situation where their insurer cannot seek compensation for losses paid out due to third party negligence. This is a risky policy provision for insurance carriers, and will often require additional cost for this type of waiver.

The reason a business or individual may ask to waive this right has to do with partial liability responsibility and want to avoid conflicts over damages or loss.

What are the Benefits and Risks of Subrogation?

One of the primary goals of subrogation is to minimize business costs and lower premiums for policyholders. This is possible by recouping the money spent on claims. Another benefit of this process is it spares the injured party from stressful court dates.

However, injured parties who receive compensation from their insurer and later sue the responsible party will have to repay their insurance company if they win their lawsuit. This is also true for trying to benefit from injury claims twice. You can only pursue these types of suits twice for an injury of the same caliber. You cannot benefit twice for the same hurt, and you will have to pay back what you received.

Fortunately for policyholders, the subrogation process is passive and intended to take place on their behalf. The subrogation process is a means to protect those who are insured, as insurance companies will themselves legally mediate a conclusion without the need for the victim to be involved. Subrogation keeps policyholder costs low by providing insurance companies a legal method to recover some of the expense associated with insuring.