Measuring the United States national debt requires us to first assess how much our nation owes to its creditors, which surpassed $26 trillion on June 10, 2020. It’s a frequent worry for many financial analysts who monitor the impact high debt levels have on vital market sectors such as employment, currency strength and economic growth.

Typically, the ratio between a country’s gross domestic product (GDP) and their level of debt is a subject of more concern, compared to actual dollar amounts owed. Currently, the U.S. is experiencing an unprecedented spike in the national debt. This trend is currently on track to reach a staggering 98.2% of GDP by the end of 2020, partly due to the COVID-19 pandemic. This percentage is equivalent to approximately $20 trillion of publicly held federal debt. 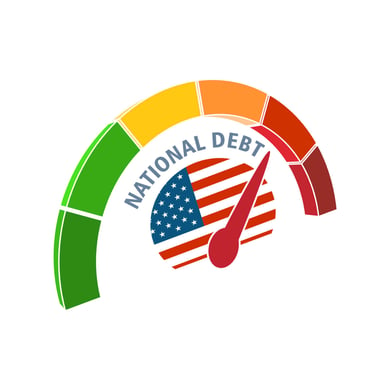 How Do We Measure National Debt?

As already mentioned, the United States uses its national debt level to measure how much the government owes creditors. It’s fairly normal for any government to spend more than it brings in, but this rise in owed expenditures feeds into the public’s share of this federal burden.

The ability for a nation to pay off what it owes relies on the proportion of debt owed compared to the economy supplying the funds to do so, known as Gross Domestic Product(GDP). That is why measuring this cost in the form of trillions of dollars does not give an accurate picture of the impacts it will have on future economics. When a country experiences economic growth, this translates to increased revenue available for paying down creditor balances.

The other effect of a growing economy is growth within the capital markets as well. This produces even more revenue that can go toward spending, thereby increasing debt once again. The ability of a nation to pay off its public share of federal expenses is directly affected by this debt-to-GDP ratio.

How High U.S. Debt Impacts the Economy and Our Wallets

Currently, the public and its economy will get some benefit from the recent levels of deficit spending. As a driver toward stabilizing and encouraging economic growth, spending on services such as healthcare, infrastructure and even defense contracting will cause a hiring surge. The wages these workers earn from this form of government subsidization will end up returning to the economy in purchases for everyday living costs like groceries, housing payments and gas for weekly commutes to work. This cycle is replicated when government agencies hire directly.

While balance is often seen as a good thing, not so here. The problem is a short-lived scenario where debt ratios continue rising, and creditors begin requiring higher amounts of interest to be paid, and the risk of non-payment increases the closer a debt ratio comes to equaling the entire GDP produced. Worse, lowered demand for the U.S. Treasury would likely cause interest rates to increase, which will cool the economy down significantly and hurt the value of the dollar. This has a cascading effect on the worth of securities from the Treasury as the decline in currency strength would mean foreign holders are receiving repayment at values worth less than what they originally paid. When this occurs, again, the economy becomes further sluggish as these creditors will instead invest their money in other countries. Once the U.S. reaches this point, interest rates due to these creditors would skyrocket.

How to Reduce the National Debt

To first understand how to reduce national debt, understanding how it’s calculated is essential. First, this process takes place daily after end-of-day reports come in from approximately forty or more different financial sources like the Federal Reserve Bank and its branches. This information details the total of securities sold and redeemed, which is then used to calculate the amount of public debt still outstanding.

To reduce this national debt, there are several approaches to take to achieve this goal:

How Bad Is Large National Debt for Our Economy?

The long-term outcome of our current national debt level has economists and financial experts divided, but there are a few aspects that have reached a consensus. Some of those agreed upon aspects include, government-issued debt securities do, in fact, affect interest rates. As well as when a government runs a fiscal deficit, it has to borrow money to manage the shortfall, which hurts private market capital investment. At the end of the day, the U.S. government will likely have to use one or more of the below steps to alleviate the public's share of the national debt burden:

Printing more money (while possible since the central bank has no printing limit) will generate an oppressive inflation, as demonstrated throughout history. This reality has prevented policymakers from completely monetizing the U.S. national debt. It’s important for everyone to understand the significant implications the national debt has on our economy. As the national debt grows so do our individual shares, which according to one statistic at the end of the 2019 fiscal year, amounts to $315,315 dollar for every person living in the United States.