A Justice for the Ages: The Legacy of Ruth Bader Ginsburg

Born Ruth Joan Bader on March 15, 1933, Ginsburg was the second daughter of Nathan and Celia Bader. Ginsburg grew up in a working-class neighborhood in Brooklyn, NY where her father worked as a merchant. However, it was Ginsburg's mother who played the most influential role in her life. Her mother Celia didn’t attend college herself. Instead, she worked to assist her brother in pursuing his own college education. Many have credited this selfless act by her mother as forever impressing upon Ginsburg the value of self-independence and higher education. Suffering the same fate as her daughter, Celia battled cancer throughout Ginsburg's high school years, dying just days before Ginsburg's graduation.

“My mother told me two things constantly. One was to be a lady, and the other was to be independent.” —Ruth Bader Ginsburg

Honoring the values instilled by her mother,  Ginsburg pursued a stellar education worthy of a  seat on the highest court in the U.S. including, a B.A. from Cornell University in 1954, Harvard Law School 1958, Kent Scholar and Columbia Law School, LL.B. 1959.

From the beginning Ginsburg was relentless in her pursuit of equality, and was acutely aware of the uphill battle she would face in this male-dominated environment. She married fellow law student Martin D. Ginsburg in 1954, the same year she earned her bachelor’s degree in government from Cornell University, finishing first in her class. From there, Ginsburg was at a junction in her life many women face--family, or career? Ginsburg, showing no sign of sacrificing one or the other, pursued both. After the birth of Jane, the first of their two children, (James would be born in 1965) Martin Ginsburg was drafted into the military. Martin served in the U.S. Military for two years. After he was discharged, the Ginsburg family returned to Cambridge, MA where Ruth and Martin enrolled at Harvard.

The 1950’s were somewhat of a different time for women. Ginsburg learned quickly she had to balance life as a mother and  law student if she wanted to find any success at her own aspirations. Ginsburg undoubtedly encountered a male-dominated, disapproving environment, where then dean of Harvard Law School, Erwin Griswold was noted for chastising Ginsburg and the eight other females in her class of more than 500 law students “for taking the places of better qualified males." (**Note: Griswold was considered for appointment to the Supreme Court several times, but never secured a nomination. He died in 1994; one year after RBG was herself appointed to the high court) But Ginsburg, earning her nickname as “Notorious RBG”, kept on. She excelled. So much so, that Ginsburg became the first female member of the prestigious Harvard Law Review. Stick that in your eye misogyny.

Ginsburg went on to graduate first in her class at Columbia Law School in 1959, with a toddler at home--still performing the endless dance of motherhood, student, professional. She went on to finish her education and begin her career where she encountered continued gender discrimination.

From 1959-1980 Ginsburg worked as a clerk for U.S. District Judge Edmund L. Palmieri, taught at Rutgers Law School and Columbia University, becoming their first female tenured professor. She served as the director of the Women's Rights Project of the American Civil Liberties Union in the 1970’s, arguing no less than six landmark cases on gender equality before the U.S. Supreme Court.

It was during this time Ginsburg gravitated toward justice reform as she fought for minority rights, all under her unwavering belief that everyone, without exception is entitled to equal rights. Ginsburg was well-known for the important ACLU work she did before taking a seat on the Supreme Court. As an advocate for the American Civil Liberties Union, she took the lead in ensuring the 14th Amendment's guarantee of equal protection also applied to gender. Again, sticking it squarely in the eye of misogyny, discrimination and unchecked bias.

Onto the Supreme Court

Ginsburg’s path to the Supreme Court began In 1980, when then President Jimmy Carter appointed Ginsburg to the U.S. Court of Appeals for the District of Columbia. She served on that court for 13 years until President Bill Clinton selected her to fill the seat vacated by Justice Byron White. Ruth Bader Ginsburg was appointed to the U.S. Supreme Court in 1993 as a replacement seen to possess “the intellect and political skills to deal with the more conservative members of the Court."

Her husband Martin, who passed away from cancer in June of 2010, was known to be a great chef. The Ginsburgs and the Scalias would enjoy festive holidays together--a cherished and notorious friendship spanning across political isles as they served on the high court for 22 years together. While Scalia and Ginsberg could engage in heated arguments, it did not affect their close friendship. Ginsburg admitted once that Scalia made her “better”, while Scalia claimed to have treasured their mutual banter and humor above all else. However, don’t mistake Ginsburg’s friendship for the intensity of her political and legal passion. Ginsburg was known to be quiet, reserved and shy. Given her proven ability to balance the most demanding roles, she was incredibly strong in her convictions and powerful in her ability to enact change. 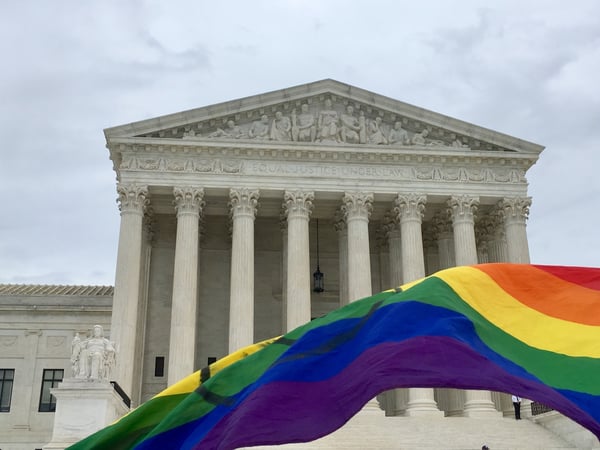 While Ginsburg was often thwarted by dissent, she was instrumental in a number of landmark cases. Perhaps most notable, she was one of the six justices to uphold components of the Affordable Care Act in 2010, as well as siding with a 5–4 majority ruling in Obergefell v. Hodges making same-sex marriage legal in all 50 United States. Ginsburg was considered instrumental in that decision, having herself officiated same-sex marriages and challenged previous arguments against same sex marriage.

Ginsburg was notably supportive of the MeToo movement, quoting its importance and ability to ride through the backlash. She was a staunch defender of the free press, as well as an independent judiciary, both immensely challenged under the current administration. Just last month, in August of 2020 Ginsburg was awarded the National Constitution Center's Liberty Medal "for her efforts to advance liberty and equality for all."

Regardless of the side of the isle your beliefs fall under, Ruth Bader Ginsburg will go down as a justice for the ages. She was without a doubt, brilliant. She dedicated her life to pursuing justice for women as well as minorities from all walks of life. Her perseverance from the beginning of her career as a student and a mother cannot be overlooked. As a woman myself who’s pursued higher education while balancing the responsibilities of motherhood, I can heart-achingly relate to her earlier years of sleepless nights, long hours of studies, and longing for her children, all while quietly fanning the flames of her inner passions, pursuit of knowledge, hopes and aspirations. I myself sat in a college classroom (in the late 90's before transferring to my alma mater) where a tenured professor confessed to the entire lecture hall, "women had no place in his classroom." I in turn, much as RBG, decided to excel at my studies and have been able to carve a respectable career from the equal right to obtain a higher education. Dare I compare myself to such a remarkable woman.

As I write these words late into the night hour, I hear the echoes of partisanship billowing in from the news of her passing in the other room. Creeping in as a ruinous and unwelcome visitor, division will only lead us further from the foundations our nation was built upon. To quote RBG herself, “Fight for the things that you care about, but do it in a way that will lead others to join you.” If nothing else, look to the deep and meaningful friendship between two opposing parties--Scalia and Ginsburg seated on the highest court in our land. Agreeing to disagree, it was a meaningful friendship that spanned decades and sat at the foundation of our constitution.