You’ve Been Served! Now What?

There’s a knock at the door, and the stranger standing there is holding a large manila envelope with a badge or ID in their hand. It can only mean one thing--you’ve been served! Fortunately, you have rights as laid out in the Due Process clause of the United States Constitution. And, service of process is simply a way of ensuring you’re informed of a complaint and summons against you so you may exercise your inalienable rights under the law. But, what does this mean? What are the differences between a summons and subpoena and what are your legal rights under the law?

Let’s look at the differences between a summons and subpoena-- both are intended to give an official legal notice of a court proceeding involving the person (or persons, business entity, organization(s)) served, or requiring an action by the defendant(s), as well as what options are available in each instance, under the law.

What is a Summons?

According to law.com a summons is a legal document issued by the courts when a lawsuit is initially filed, and can be used in either a civil or criminal case. Specifically, a summons is the official legal notice of a lawsuit and an invitation to come to court upon the defendant. A summons is not an order, and the defendant won’t face jail if they don’t comply. However, there are consequences for ignoring a summons--such as losing the case. By default, the defendant will have to obey the court’s final decision even if they choose to ignore the initial lawsuit in civil and criminal cases.

In order to start the clock allowing a defendant to respond, a copy of the summons must be served on each defendant at the same time as the complaint. After service of process is completed for all required defendants, the original summons (along with the return of service proving the summons and complaint were served properly and to the letter of the law) is filed with the court as proof each defendant was served correctly. This is when the clock starts to tick on a response. (often 30 days from being served)

What to do if Served with a Summons

Let’s start with the first thing not to do-ignore it. In the instance of a lawsuit, failing to reply will force the court to award a default judgement in favor of the plaintiff. Therefore, the consensus here is to respond, and within the allotted time-frame.

There is one kind of summons that cannot be ignored, a Citation to Discover Assets. If a defendant were to lose a lawsuit or case requiring financial compensation to the plaintiff and that judgement isn’t paid, a Citation to Discover Assets will be issued. In this instance, it’s highly advised to seek legal counsel immediately. At this point, a situation could be made exponentially worse by ignoring the citation or failing to appear at a specified court date. Extensive penalties, fees and additional judgements could be incurred by the defendant for continued failure to respond or appear.

What is a Subpoena?

According to hg.org legal resources, a  subpoena “notifies a person that he or she must appear in court at a certain location, date and time in order to provide testimony as a witness. Generally, a subpoena is issued to secure your testimony in court and not for out of court purposes, but there are some exceptions. Additionally, a subpoena may direct you to provide certain documents to the court". 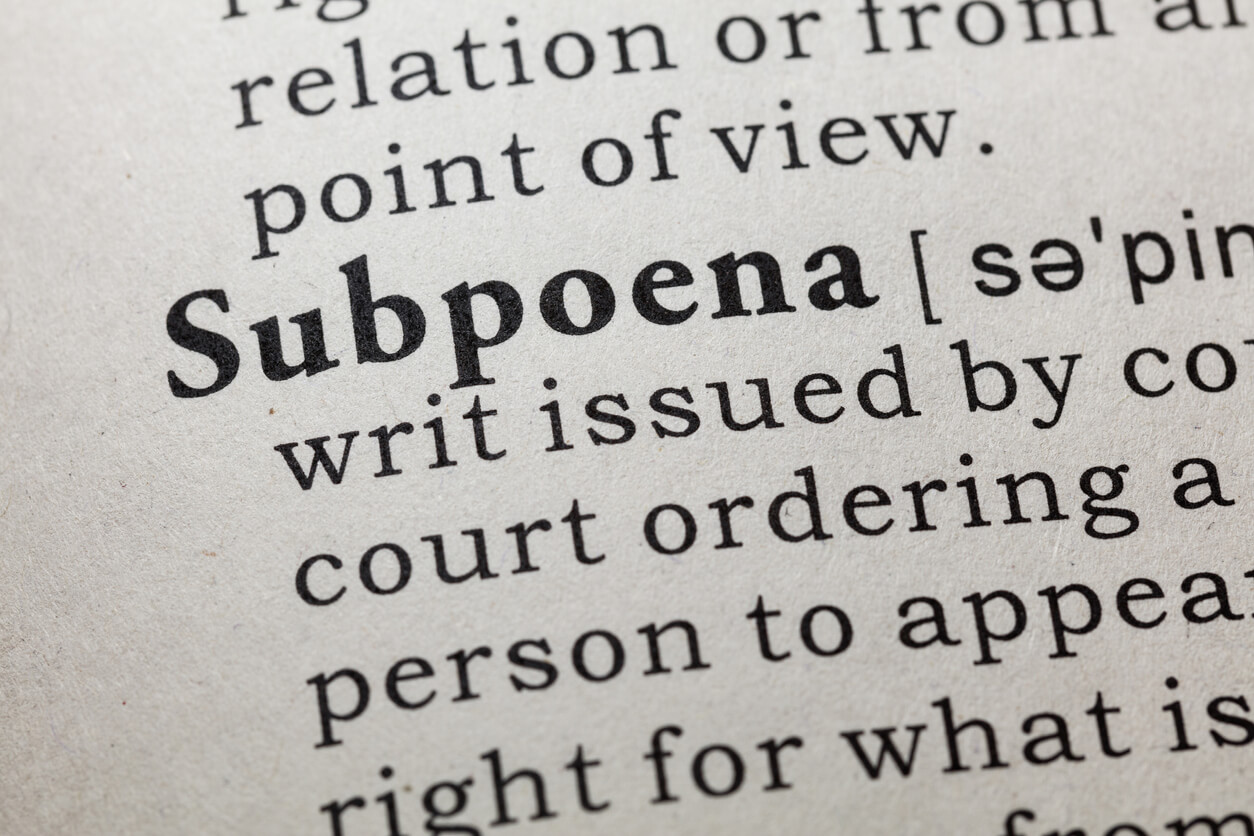 Generally speaking, a subpoena does not have to directly involve the individual it's served upon and is usually a demand by the court for evidence or to appear as a witness for either the prosecution or defendant.

Common reasons a subpoena is issued include:

The subpoena is required to include:

What to do if Served with a Subpoena

Legal counsel is advised to ensure the response to a subpoena is filed correctly and on time, and if for any reason there is an issue to what's requested in the subpoena. Specifically, if the defendant cannot appear when required, an attorney will be advised in asking the court for a change--which, depending on the circumstances, could or could not be granted.

While being served legal papers such as a subpoena or summons is sometimes seen as ‘bad luck’, it’s actually a very important and valuable right under the United States Constitution. Due process of the law requires service of process for subpoenas and summons, guaranteeing the ability for all to get their day in court. Knowing your rights and exercising them is the first step, preferably with the expert advice of legal counsel. If you have questions about service of process on how to serve a summons or subpoena visit ABC Legal’s service of process page here.