What ABC Mobile Looks for with Every Submission

Our Guidelines and Expectations specify: A process server shall make attempts on each job within 48 hours of receipt and within every 48 hours after. Services or attempts should be submitted via ABC Mobile with the following reporting requirements:

Any scenario where a server's safety is at risk is an exception to the above requirements. A process server may leave the area and record the event details - including how the scenario became unsafe - once they have retreated to a safe location.

The pictures you take in the field help support your attempts and services. Photos should include unique attributes to the address, such as:


Avoid including in your pictures:

You can take pictures before and/or during a submission in ABC Mobile.

If you ever submit an attempt that is flagged as not meeting a Reporting Requirement, it will be necessary that you respond to the transgression as soon as possible to avoid delays in the order. Simply explain the circumstances that prevented you from meeting these requirements in ABC Mobile. If you do not provide an answer ABC Legal will be unable to process the order further and the order will appear under the heading "Respond to Notifications". To fix this, you must go to your Notifications tab in ABC Mobile (or log in online to respond) and provide an answer. 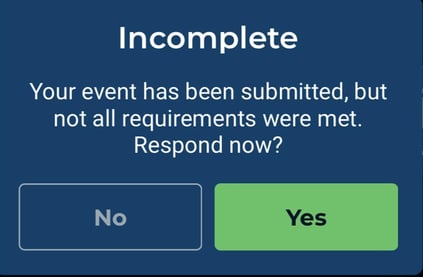